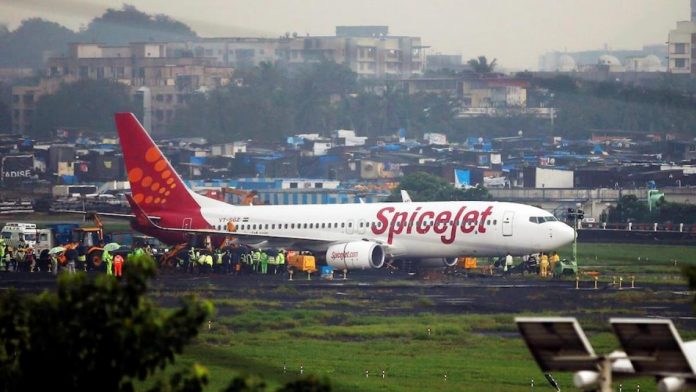 New Delhi: An uncommonly large number of episodes including SpiceJet airplane has promoted the aviation regulator to seek an explanation from the airline. The Directorate General of Civil Aviation, or DGCA, has brought up large holes on how the aircraft is working, from working trips with “debased security edges”, gives that point at “poor internal safety oversight” to vendor not being paid on time, prompting lack of extra parts for the SpiceJet fleet.

The public authority’s notice said SpiceJet is working its fleet on MEL, or Minimum Equipment List, and that implies the airplane are viewed as protected to fly but not all systems are necessarily opertational.

Recently, a SpiceJet cargo plane traveling to China returned to Kolkata after its climate radar stopped working. It was the eighth occurrence of technical malfunction on a SpiceJet airplane over the most recent 18 days.

“It has been seen that at number of events, the airplane either turned around to its beginning station or kept arriving at the objective with corrupted wellbeing edges,” the DGCA said in the notification.

“The (DGCA) survey happens that poor inside wellbeing oversight and deficient support activities (as a large portion of the occurrences are connected with either part disappointment or framework related disappointment) has resulted in degradation of safety margins,” the aviation regulator said.

“Financial assessment carried out by DGCA in September 2021 has likewise uncovered that aircraft is working on money and carry and providers/approved sellers are not being paid on regular basis, leading to shortage of spares” it said.”It might be found that SpiceJet Ltd has neglected to lay out a protected, productive and reliable air services,” the DGCA said.

Common Aviation Minister Jyotiraditya M Scindia likewise tweeted a duplicate of the DGCA notice. “Traveler security is vital. Indeed, even the littlest mistake ruining security will be totally researched and course-revised,” he said.

Some of the recent incidents involving SpiceJet aircraft are:

May 4: Chennai-Durgapur aircraft turned back after one of its engines had to be shut down mid-air due to oil filter warning.

May 28: Mumbai-Gorakhpur flight returned to base after its windshield cracked at 23,000 feet.

June 19: Jabalpur-bound plane returned to Delhi after cabin pressure did not build up with the gain in altitude.

June 19: Patna-Delhi aircraft made emergency landing after its engine caught fire due to a bird hit soon after take-off.

July 2: Jabalpur-bound aircraft returned to Delhi after smoke was seen in cabin.

July 5: Cargo plane to China turned back to Kolkata after weather radar failed.