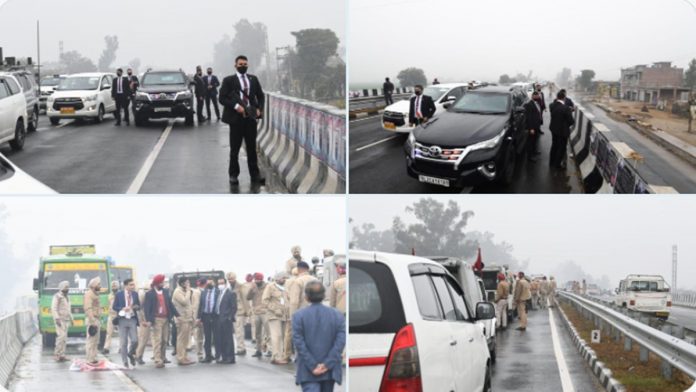 Prime Minister Narendra Modi canceled his program in Punjab yesterday after a massive security breach left him stuck on a highway for 20 minutes because of protesting farmers. In a spiraling line in election season, the BJP accused Punjab’s ruling Congress of “murderous intentions”. Chief Minister Charanjit Singh Channi, denying any lapse, said he would die for the Prime Minister but he was never in danger.

Visuals from Bathinda showed the Prime Minister’s guard on the flyover, surrounded by Special Protection Group (SPG) personnel. PM Modi was seen waiting in a black armored Toyota Fortuner ringed by SPG officers. Barely a few feet from his car were clusters of people and policemen. Images tweeted by a BJP worker showed posters held up as the PM’s car drove by. A BJP bus following the convoy was heckled by protesters.

PM Modi cut short his visit and got back to the airport.

“The PM was stuck on a flyover for 15-20 minutes. This was a significant lapse in the security of PM,” said the Home Ministry in a statement.

It was the “single greatest lapse by in the security of any Indian Prime Minister as of late”, added the BJP.

The Prime Minister had landed in Bathinda recently and was to be traveled to a Ferozepur rally by helicopter. After waiting for the weather to clear up, he decided to go by road to the spot two hours away.

Around 10 km from the rally site, the PM’s caravan was blocked by farm protesters.

“It was a murderous conspiracy to kill the PM. The Congress hates him, now they want to harm him,” said BJP leader and Union Minister Smriti Irani.

Countering images of the PM’s convoy on the highway, the Punjab minister tweeted photographs of what they guaranteed were empty seats at his canceled rally.

Chief Minister Channi, facing BJP attacks, expressed regret that the PM had to return but pointed out that the plan changed at the last minute and that the convoy was offered an alternative route.

“As a Punjabi, I would die to protect you…but there was no danger to his life. There was no security breach. We have every respect for our Prime Minister,” Mr. Channi said.

BJP chief JP Nadda had before suddenly erupted the Chief Minister, blaming him for declining to accept calls.

“It is said that PM’s visit to launch development projects worth thousands of crores for Punjab was disrupted… State Police was instructed to prevent people from attending the rally…CM Channi refused to get on the phone to either address the matter or solve it,” Mr. Nadda tweeted.

“10,000 security personnel were deployed for the PM’s Rally. All arrangements were made in tandem with SPG and other agencies. A route was carved even for all buses of BJP workers from Haryana/Rajasthan. PM decided to take a road journey to Hussainiwala. It was not part of his original schedule to travel by road,” Mr Surjewala said.