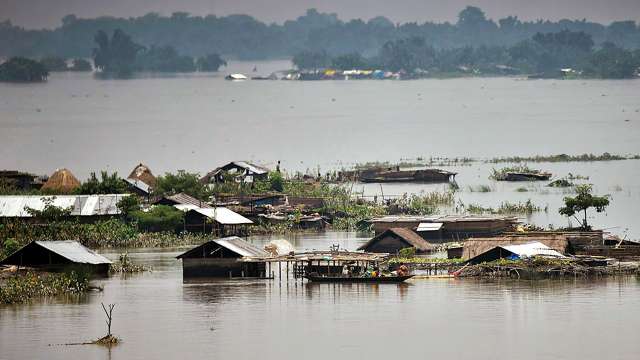 Cyclone Amphan came as a disaster for a lot of Indian states, Assam being one of the worst hit state. Nearly nine districts of the state have been flooded with water, making 3 lakh residents float for help. This was the first flood of the season considering that Assam gets damaging floods every year.

This year the trouble is doubled up due to corona virus. The flood has displaced people, destroyed the crops, roads, infrastructure, and damaged homes like every year. But this year, even the corona relief camps are rooted out by the flood.

After almost a week of the flood, around 60,000 people are still affected by the flood. The floods have crossed the Lakhimpur districts to reach Dhemaji and West Karbi Anglong.

Among all the districts, Goalpara is the worst hit with over 42,000 people affected. Around 13,000 people are affected in Hojai and around 3,000 in West Karbi Anglong.

According to the daily flood report of the Assam State Disaster Management Authority (ASDMA), people have even died because of the floods.

Around 10 people lost their lives. Also, around 103 districts have gone under water and around 6,439 hectares of crop areas have been damaged. There have been shelters provided to the homeless in 11 relief camps built in two districts. More than 1700 people are sheltered there.