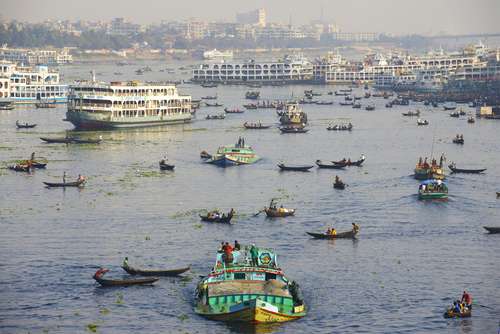 Bangladesh went through a major accident when a Bangladeshi ferry collided with a bigger vessel in Buriganga River near the Shyambazar area of Old Dhaka of Bangladesh on Monday. Not less than 30 people drowned to death out of 100 passengers trapped and many went missing.

Bangladesh Inland Water Transport Authority said that the negligence of the drivers was the cause of the major accident. Many passengers were trapped in the ferry when it sank down in the river.

The ferry with the name of ‘The Morning Bird’ was coming to Dhaka from Mushiganj when it was hit by ‘Moyur-2’ near the Sadarghat Launch terminal. Most of the dead bodies have been identified and handed over to their family. Moyur-2 was in a high speed moving towards the terminal to pick up passengers to be ferried to central Chandpur district.

“Thirty two bodies have been retrieved so far. Search is on for the missing ones,” one of the BIWTA official said. It is preparing to lay out balloons to retrieve the Morning Bird.

After the accident, the staff and management of Moyur-2 went into hiding immediately. “We have launched a manhunt for the master in particular,” a police offer informed the media.

The officials found a CCTV that made the picture pretty clear. In the footage, Moyur-2 can be seen rushing over the little ferry from behind which later sank down in less than a minute.

Junior minister for shipping, Khalid Mahmuh Chowdhury stated, “what it initially appeared from the CCTV footage, it could be a staged event, a planned Massacre.” He informed that investigation has been already started for the case and if his doubt about all this being a planned event turns out to be true, strict actions will be taken against the culprits.

The actual number of people drowned or saved is not yet clear. When the accident took place, the people on the shore dived in for the aid. The water is too muddy to carry on the rescue operation without interruptions.

This is not the first time that accidents of the ferries have taken place in Bangladesh. Many similar incidents have been reported and poor safety standards and reckless driving have been reasons identified for such accidents.