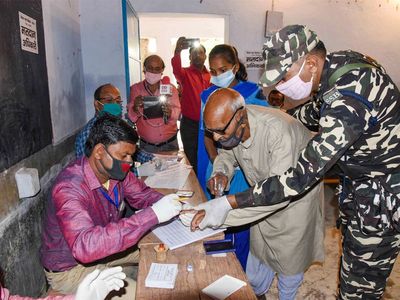 The third and final phase of Bihar assembly elections has come to a close with the 78 constituencies that went to polls on Saturday witnessing a voter turnout of 55.22%, the Election Commission on India said. A total of 23,554,071 eligible voters across 15 districts were registered in the third phase of polling. As many as 1,204 candidates, including several heavyweights like the Janata Dal(United) or JD(U)’s Narendra Narayan Yadav from Alamnagar constituency and Bijendra Prasad Yadav from Supaul, were in the fray in this phase.

It is also noteworthy that five of Bihar’s 15 districts that cast their ballots in the final phase of the assembly elections on Saturday, were among the state’s top 10 Covid-19 districts in terms of the total number of cases. In the first phase of assembly polls on October 28, roughly 54.26% of 21.4 million people voted across 71 seats while in the second phase of voting that was conducted on November 3 across 94 assembly constituencies spread over 17 districts, the provisional voter turnout stood at 55.70%.

As voting has concluded, all eyes are now on November 10 when the result of the elections held across 243 assembly constituencies of Bihar will be announced. While the Bharatiya Janata Party-led National Democratic Alliance (NDA) government led by chief minister Nitish Kumar is looking to retain another term, the Grand Alliance led by the Rashtriya Janata Dal (RJD) chief Tejashwi Yadav is also confident of a win in the state.