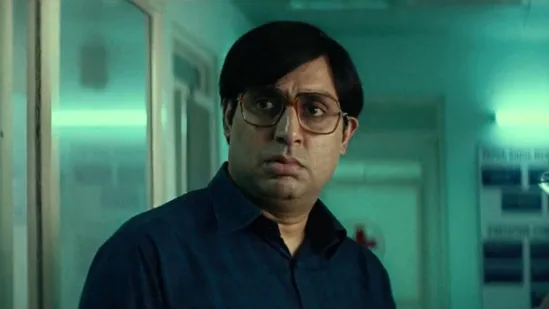 Abhishek Bachchan will portray the character of ‘Bounce Biswas’ in Sujoy Ghosh’s next film of a similar name. Gaining weight was an intense experience for Abhishek Bachchan. The actor weighed around 105kgs while going for Bob Biswas., unlike many actors, Abhishek wasn’t willing to use CGI or prosthetics to achieve the look and feel of Bob, and instead, he went all out to gain weight in order to look and feel like Bob. In an interview with India Today, Abhishek Bachchan revealed how he envisioned becoming Bob Biswas and why it was so important for him to gain weight.

In an Interview, Bob Biswas star Abhishek Bachchan talked about being told to wear a bodysuit, saying, I did try it on, I like to give everybody a fair opportunity. I wasn’t happy with it because of the lack of movement. When you put a prosthetic stomach, it is very inanimate. And you look fake somewhere. I did it in Guru 14-15 years ago, I did it for Bob, I put on a bit of weight for Big Bull because the role required it. But for Bob, I had to push it to another level. I became between 100-105 kilos during the shoot. When you do prosthetics on the cheeks, it looks like a prosthetic. The stomach also moves in a different way. When you have that weight and you are physically carrying that weight, your entire performance changes because your body language changes your weight, your movement, your walk, your run, everything changes.”

He added, “Weight pulls you down a bit. So, I wanted that slight hunch. I wanted that in the walk. For me, I feel if I can look at the character, I feel 50% of my performance is taken care of. That’s what we did. It was very difficult. It was fun. I mean to put on the weight obviously. Then, shooting in Kolkata in winter. You can have Gud Sandesh and all the wonderful sweets that Kolkata has, but mentally I got stuck because we had to shut down our shoot halfway through because of the lockdown and we were about 80 percent done. And, we had another 10-15 days of work left. Throughout the lockdown, I had to maintain that weight. That was tough. Because it is not nice to be overweight like that. It is very cumbersome, and I am not even getting into the effects it has on your health which it does, but it is difficult to carry that kind of weight around you. You have to do what you have to do for your work and your film. We managed to pull it off and finish the film and started the arduous process of losing it for my next project, which I was shooting soon after,”.

He further discussed his psychological change and said, “It was a tough and a deep-dark tunnel to be honest. Bob has lost his memory, so everything is fair game. There are no dos and don’ts. So, this was the process of basically rediscovering a person altogether. Even emotionally, it is a daunting task for anybody to wake up from a coma and not remember anything.” Abhishekh also revealed how a part of his character will also remain with him no matter what.

The actor was even gotten some information about how his little girl and the Bachchan family responded to his weight gain to which he said, “the family was very understanding since they knew that it is the second nature of actors at home and everybody is used to this process.”

Abhishek Bachchan has been busy preparing for his upcoming film Bob Biswas. The film will premiere on Zee5 on December 3, 2021.