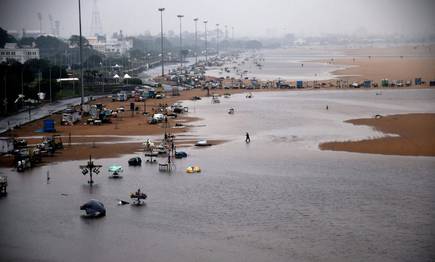 Cyclone Nivar crossed the Tamil Nadu and Puducherry coast around the union territory as an extreme cyclonic strom between 11.30pm Wednesday and 2.3 am Thursday with a wind speed of 120-130kmph, the India Meterological Department (IMD) said.

Nivar’s intensity has weakened into a severe cyclonic storm with a wind speed of 110-120kmph. It will further weaken into a cyclonic strom before early afternoon Thursday, as per the Weather office.

Puducherry recorded rainfall estimating 237mm between 8.30am Wednesday and 2.30am Thursday. During a similar time, Cuddalore recorded 246mm and Chennai 83mm.

The Greater Chennai Corporation said that ucivic workers were working to clear several uprooted trees and electric poles and inundated localities in the city as well as coastal and delta districts of Tamil Nadu and Puducherry.

Officials are awaiting reports on the extent of damage from districts.