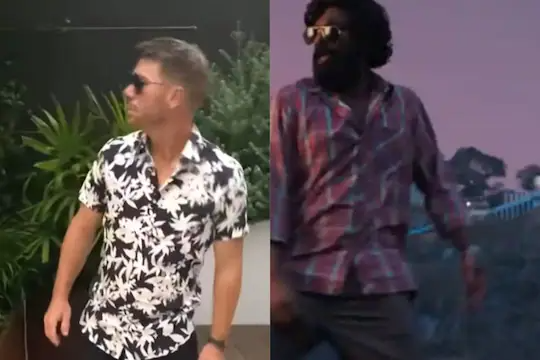 Sometimes, former Australian cricketer, David Warner proves that his list of abilities goes a long way past the game of cricket. Warner’s Instagram is a treasure trove of dance clips and funny lip-sync videos and he definitely has a soft corner for Indian movies.

In his recent post, David Warner shared a dance video where he should be seen grooving to Allu Arjun’s dance steps in the Srivalli song. It is safe to say, Warner has Pushpa fever just like other netizens! The clip shows him doing the exact steps, including the chappal slipping step, just like Allu Arjun did in the movie.

The video has gotten over 598k likes since being shared an hour ago. Netizens loved the video and gave the video compliments. Even Allu Arjun was thoroughly impressed with Warner’s dance skills. He commented with some smiling and fire emojis.

Here’s how others reacted:

Srivalli was composed by Devi Sri Prasad and the lyrics are by Chandrabose. The song has over 66 million views on YouTube. The Hindi version of the song has been sung by Javed Ali and the original version by Sid Sriram.