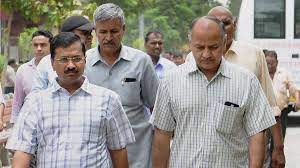 The administrative reshuffle came hours after Manish Sisodia, who likewise handles the Excise division, was struck by the CBI and named a charged in the First Information Report or FIR on alcohol strategy infringement.

Mr Sisodia is number one on a rundown of 15 charged named in the CBI’s FIR. The offenses recorded in the 11-page archive are debasement, criminal scheme and adulteration of records.

Other than Mr Sisodia’s home in Delhi, 31 different areas were looked by the CBI across seven states. After the 14-hour assault, Manish Sisodia said his PC and telephone have been held onto by the test office.

Under the strategy sent off in November, alcohol shop licenses were given over to private players. It was moved back by Mr Sisodia on July 30 after a test was begun at first by the Delhi Police’s Economic Offenses Wing.

The CBI states that Mr Sisodia presented the new strategy on who might be permitted to sell liquor in Delhi without the consent of the Lieutenant Governor, who is the middle’s agent in Delhi.

In its FIR, the CBI guaranteed that an alcohol dealer has paid ₹ 1 crore to an organization oversaw by a partner of Mr Sisodia. The test organization claims that alcohol organizations and go between were “effectively associated with abnormalities in the outlining and execution” of the extract strategy.

Delhi’s Lieutenant Governor VK Saxena had suggested the CBI test last month after a report from the Chief Secretary charging inconsistencies in the new liquor policy.

The Lieutenant Governor has blamed AAP for bringing the Excise strategy “with the sole point” of helping private alcohol aristocrats for monetary advantages to “people at the most elevated echelons of the public authority paving the way to Manish Sisodia”.

AAP says Mr Sisodia is being focused on the grounds that the Center was irate over the first page holler to him in the New York Times on Thursday.