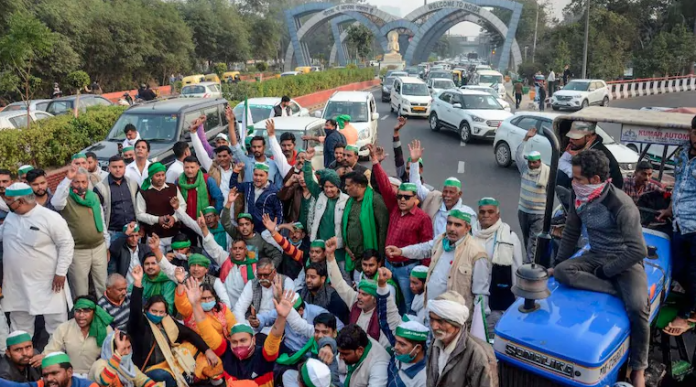 On the seventh day of their protest against the three contentious farm laws passed in the Parliament in September, farmers continued their sit-in at the Delhi- Noida border for the second day on Wednesday, leading to closure of a key route connecting the national Capital with Uttar Pradesh.

The traffic police has advised commuters travelling to Delhi to avoid using the Chilla route and instead take the DND or Kalindi Kunj route.

“The Chilla border on Noida-link road is closed for traffic due to farmers protests near Gautam Budh Dwar. People are advised to avoid Noida-link road for going to Noida and use NH-24 and DND instead for Noida,” Delhi Traffic Police tweeted.

Hundreds of farmers affiliated to the Bharatiya Kisan Union (BKU) and other groups had gathered at the border on Tuesday evening. Heavy security was deployed on both sides of the border to prevent them from proceeding towards Delhi to join farmers of Punjab and Haryana in their protest.

Farmers are agitating against the three agricultural laws passed by the Centre in September. The three laws, that according to the farmers would make them vulnerable to exploitation by big corporations, are — The Farmers’ Produce Trade and Commerce (Promotion and Facilitation) Act, 2020, the Farmers (Empowerment and Protection) Agreement on Price Assurance and Farm Services Act, 2020 and the Essential Commodities (Amendment) Act 2020.

However, the government has stuck to its stance that the laws are beneficial for the farmers. On his monthly radio programme Mann Ki Baat, Prime Minister Narendra Modi said, “New dimensions are being added to agriculture and its related activities in India. The agriculture reforms in the past few days have also now opened new doors of possibilities for our farmers.”

““These reforms have not only broken shackles of farmers but have also given new rights and opportunities for them. These rights started mitigating problems that were being faced by farmers in a short span of time,” he added.