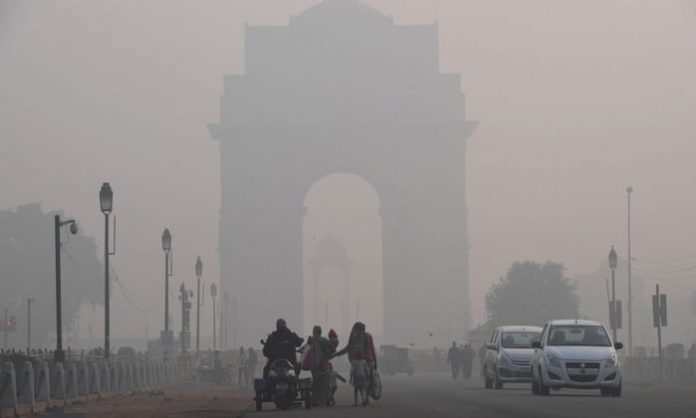 A day before Diwali, Delhi woke up to “very poor” air qualityon Friday morning – showing a marginal increase from the previous day’s 24-hour average Air Quality Index (AQI). On Friday morning the AQI is 328 while on Thursday the AQI was 314.

The Capital’s AQI was ‘severe’ for six days, starting November 6. Due to a change in wind speeds, Delhi’s air quality had marginally improved on Wednesday and Thursday but scientists have warned that respite from severe pollution will be short-lived. VK Soni, head of IMD’s environment monitoring research centre, said winds blowing over Delhi will start slowing down from Friday, and their direction will switch to north-westerly, increasing the contribution of stubble-burning smoke from Punjab and Haryana.

Smoke from farm fires contributed to just 3% of Delhi’s PM 2.5 levels on Wednesday, the lowest since October 14.

“Even though we have forecast that this Diwali is likely to be better compared to the last few years, the weather is expected to be unfavourable. If people in the city burst crackers, then the pollution level could slip to ‘severe’ on Diwali day and a day after,” Soni said.

Kuldeep Srivastava, head of IMD’s regional weather forecasting centre, said that from Diwali afternoon the wind speed will dip to nearly 6 kmph. “From Diwali evening the air quality is likely to start deteriorating. However, from Sunday night the wind direction is expected to change again to easterly and there is also a possibility of light rain,” Srivastava said. The IMD forecast said that wind speeds are likely to improve from Monday.

The System of Air Quality and weather Forecasting and Research (SAFAR) under the Indian Institute of Tropical Meteorology, also released a similar forecast for Delhi’s air quality for the Diwali weekend. “The stubble burning induced impact in AQI is expected to increase from negligible to moderate for the next two days,” the SAFAR forecast read.

The forecast added that even if residents do not burn any crackers, the PM 2.5 level is still expected to be on the higher-end of ‘very poor’ or the lower-end of ‘severe’ category. However, despite unfavourable weather conditions, the forecast said the AQI is expected to be better this year, as compared to Diwali day and the days after the festival for the past four years.