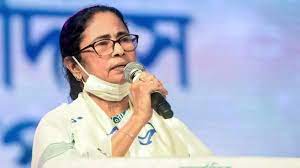 Kolkata: West Bengal Boss Clergyman Mamata Banerjee today hit out at the focal government, guaranteeing that Bengal’s duty by virtue of Labor and products Assessment (GST) and assets under different focal plans were being kept down by the BJP-drove government under State leader Narendra Modi.

Going to an ancestral effort program in Jhargram, the Bengal CM said: “The 100-day work ensure plot reserves are required. Disregarding that, a year prior, I proceeded to meet the PM in regards to this. Would it be a good idea for me to fall at your feet and ask?”

Going after the BJP, Ms Banerjee said: “Would we say we are living in a majority rule government? Or on the other hand has India turned into a ‘one-party’ country?”

“Give us our levy. This is our cash. In any case, scrap GST. You need to put in us our time for 100-day work conspire or, in all likelihood leave your seat,” she said, while paying rich recognitions for Birsa Munda, a political dissident from the ancestral local area.

“They take steps to stop assets to Bengal. We can likewise stop GST,” the Central Pastor said. “You can’t gather charges here and keep our genuine contribution. You are denying individuals of Bengal what is their due,” Ms Banerjee included in a sharp assault the BJP-drove government.

Recently, Ms Banerjee went after BJP’s Suvendu Adhikari who had said that the middle would stop assets to Bengal under different plans considering defilement.

Hitting out at Adhikari, the Main Clergyman said: “At some point, such government officials will become zero, assuming they keep dissing Bengal. We are positioned among the top states with regards to executing these plans, be it 100 days’ work or Grameen Sadak Yojana or Bangla Awas Yojana.”

While tending to the crowd at the program in Jhargram today, she encouraged the tribals to stir things up around town and sit on a dharna in the event that their legitimate cases are denied and their levy held back.