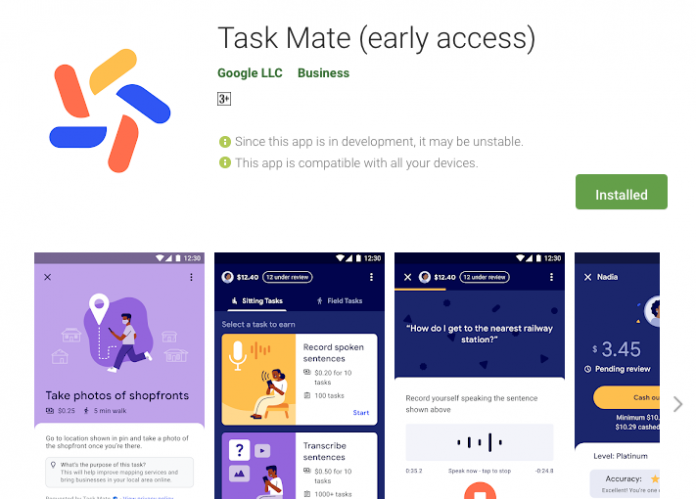 Google is currently testing a new app in India that will allow users earn money by doing some simple tasks. It’s literally as easy as it sounds. Google’s Task Mate app offers money as rewards and the money gets put right into your bank account.

Task Mate is currently being beta tested here and to earn rewards you need to do things like record a certain phrase, take photos of a business etc. The Google Task Mate app is similar to the Google Opinion Rewards app that’s available on the Play Store. The Opinion Rewards app lets users earn Play Store credits by answering survey questions for Google. These Play Store credits can be used for purchases like Play Movies, Play Books etc. However, these rewards are not monetary and cannot be transferred to users’ bank accounts.

Unlike that, Task Mate rewards will be sent as money to your account and instead of surveys, you need to do things like – record clips of certain phrases, take photos of shop fronts, transcribe sentences, check shop details etc to earn rewards. The reward money can be collected from the app and be transferred to the users’ e-wallet account or with an in-app payment partner. You will have to register your e-wallet account during the setup process.

The Google Task Mate app can be downloaded and installed right now but it’s the beta version. It is also only available for use on an invite basis so even if you download it, you cannot use it unless you have an invite. Google has not announced yet when the public version is going to roll out but it is expected to be soon.