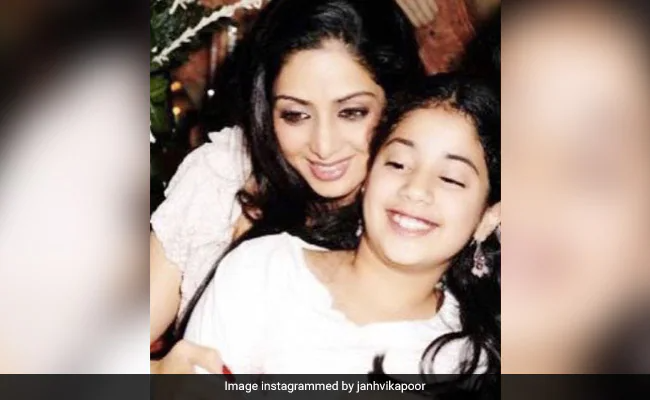 New Delhi: Janhvi Kapoor lost her mom, Actress Sridevi, in 2018, only months before she stepped into Bollywood – today marks Sridevi’s 57th birthday. On Instagram, Janhvi Kapoor poured her heart out in a note dedicated to late actress Sridevi. Janhvi Kapoor’s post arrived in the form of a throwback photo, a childhood memory featuring herself and mom Sridevi – little Janhvi smiling ear-to-ear it the photo says it all about the happy memory. In her note, Janhvi dedicated this message to the late actress: “Happy birthday Mumma. I miss you. Everything is for you, always, every day. I love you.” Janhvi’s post was showered with red hearts, including comments from celebs such as Dia Mirza and others.
Here’s how Janhvi Kapoor remembered mom Sridevi on her birth anniversary.

On Sridevi’s death anniversary this year, Janhvi Kapoor composed the most heart-wrenching message: “Miss you.” Janhvi shared a photo of what appears to be a letter she received from her mom, which said: “I love you, my labbu. You are the best baby in the world.” Meanwhile, Janhvi’s sister Khushi posted a throwback photo of parents Sridevi and Boney Kapoor and wrote: “I love you.”

Only months after Sridevi’s passing, Janhvi Kapoor went to the National Awards wearing one of her mom’s kanjeevaram saree. Sridevi was posthumously honored with the Best Actress National Award for her role in MOM, which was her last film.

Sridevi passed away in 2018 after accidentally drowning in a hotel bathtub in Dubai, where the Kapoors were going to the wedding celebrations of Mohit Marwah. Sridevi was 54. Janhvi Kapoor made her Bollywood debut with Dhadak in 2018, after which she included in the Netflix collection Ghost Stories. Her upcoming movies include Dharma Productions rom-com Dostana 2. Khushi Kapoor studies film in New York – she is yet to reveal her Bollywood plans.

This Video Of Two Dogs Went Viral With Over 7 Million Views.