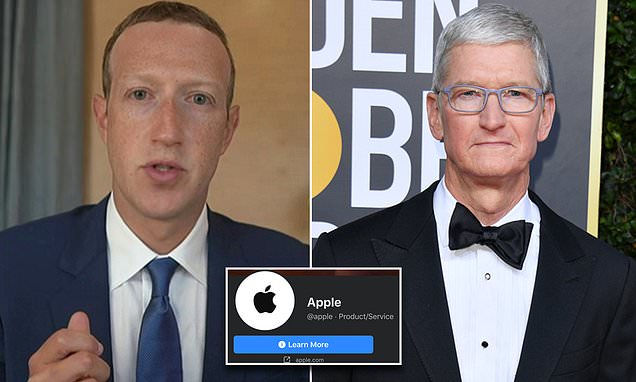 Facebook and Apple have been at battle with each other over the app permission issue and how it my hamper the business of the social media giant. Mark Zuckerberg’s company is doing everything it can to influence millions that what Apple is doing will kill the business of many. It recently got a full page advertisement claiming the same. And recently it was reported that, to show its hatred towards the iPhone maker, Facebook unverified the company’s page on its website.

It is worth adding that other pages like Apple TV, Apple Store and Apple Music show the verified tick. The company’s main page too has a verified tick on Instagram, a platform owned by Facebook.

The privacy war between the two emitted seven days ago. The main topic of discussion are the changes Apple made in iOS 14.4 for iPhones. The OS form should go live one year from now and would require iPhone users to give permissions so that applications can track them for advertising purposes.

Facebook, for now, tracks users between apps. As per them, it helps them connect small businesses to customers and show personalized ads. Apple introducing granular permissions would hamper this as Facebook might suspect most users will deny the permission to track them between apps.

Tim Cook, Apple’s CEO also tweeted ‘We believe users should have the choice over the data that is being collected about them and how it’s used. Facebook can continue to track users across apps and websites as before, App Tracking Transparency in iOS 14 will just require that they ask for your permission first.’

However, Cook did not mention about Apple’s own personalised ad platform, which won’t require to take permission from users. ‘Apple is behaving anti-competitively by using their control of the App Store to benefit their bottom line at the expense of creators and small businesses. Full stop,’ Facebook Vice President for Ads and Business Products Dan Levy said recently.