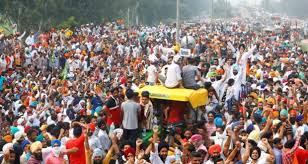 Even as the Singhu border close to outer Delhi’s Narela has remained closed for traffic since Thursday evening due to thousands of agitating farmers marching towards Delhi, on Friday morning police also close the Tikri Border that leads from Delhi to Bahadurgarh.

Traffic police alerted commuters that both the carriageways of the Tikri Border have been closed and drivers could neither enter Delhi, nor go to Haryana through that route.

The Singhu border that connects Narela and adjoining Delhi areas with Sonipat was closed around 4.30pm on Thursday as Delhi Police said they had inputs from their Haryana partners about farmers approaching the border.

Gaurav Sharma, deputy commissioner of police (outer-north), said on Thursday evening that the Singhu border would be open by 7pm, but that did not happen as the threat did not mitigate.

Drivers have been encouraged to avoid the Singhu border, the Tikri border, NH-44, Outer Ring Road, and Mukarba Chowk in view of the blockades and strict checking at the borders.

While other border routes have remained open, police checking at every one of those points has slowed down the traffic intensely since Wednesday night.