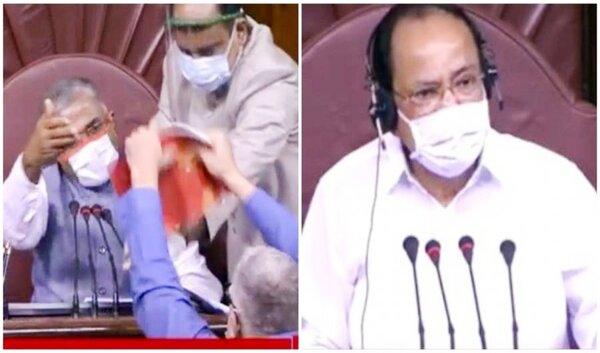 Eight opposition MPs, including Trinamool Congress floor leader Derek O’Brien and AAP’s Sanjay Singh, were suspended from Rajya Sabha for seven days under Rule 256(2) on Monday for their “unruly behaviour” during the fierce protests over the farm bills on Sunday.

The government moved a motion for their suspension for “bringing disrepute” to the House. The motion was approved by the House amid protests from Opposition leaders.

However, the no-confidence motion against deputy chairman of Rajya Sabha Harivansh filed by the Opposition was not accepted by the chair.

The suspended MPs initially refused to leave and shouted slogans, prompting Rajya Sabha chairman Venkaiah Naidu to adjourn the House till 10am. At the point when the House resumed, the suspended MPs continued with their fights and the House was dismissed for another thirty minutes.

Naidu, visibly upset over Sunday’s development, made an observation at 9.30am, at the end of the zero hour, listing all “unruly offences” committed by the Opposition MPs in the House. He said that apart from shouting slogans and “dancing on the table”, few MPs even attempted to “physically harm the deputy chairman”. During his speech, O’Brien and others started protesting.

Naidu named O’Brien and requested that he go out. Minutes later, the government moved a resolution seeking the suspension of eight MPs who led the protests on Sunday. The resolution was adopted through a voice vote.

The suspended MPs didn’t leave the House and instead started a new round of protests.The chair has the option of calling the marshals to forcibly evict the MPs but so far, Naidu has not opted for that extreme step.

Rajya Sabha was then adjourned till Tuesday after Members who were suspended wouldn’t go out. The chair insisted that business could be taken up only after the members leave the house. Bhuwaneswar Kalita, who was in the chair, said a statement by Congress MP and Leader of Opposition in the Rajya Sabha Ghulam Nabi Azad could only be allowed once the MPs leave the house.

On Sunday, the Rajya Sabha turned into a battlefield. Senior leaders charged towards the deputy chairman, gheraoed him, uprooted microphones, jumped up on tables, flouted rules to shoot videos of the ruckus and shouted slogans. Authorities called marshals to form a double-layered barricade to protect the Chair, remove an MP from the table, muted live proceedings and refused to accept the Opposition’s demand for a division—voting through paper ballots—on the bills.

The high-pitched protests were also the most aggressive in recent years and continued even after the House was adjourned at 1pm. Opposition parties sat in Rajya Sabha for the next two hours and drafted a no-confidence motion against newly re-elected Rajya Sabha deputy chairman Harivansh before firing salvoes against the government on Twitter.