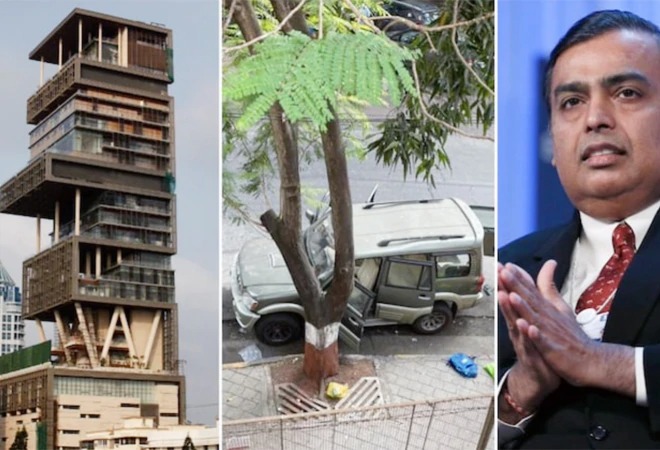 The Toyota Innova linked to a bomb scare near industrialist Mukesh Ambani’s home in Mumbai on Thursday has been spotted on CCTV feed as it leaves the city via the Thane-Mulund toll plaza earlier that same day, Mumbai Police’s Crime Branch said on Saturday morning.
The police say the new footage is crucial – it shows a man in the driver’s seat, who can be seen as he leans out to pay the toll. The car then drove off in the direction of Thane. The driver of the car has not yet been identified.

The CCTV feed shows a white Innova pulling up to the toll gate at around 3 am on February 25 (according to the timestamp) – the day that an abandoned SUV filled with explosives – 20 gelatin sticks and several detonators – was found metres away from Antilla, Mr Ambani’s iconic home.

The gelatin was not of military grade but the commercial kind that is usually used in construction, digging or mining, police sources have said.

Police believe the two cars, which were captured on CCTV footage, were deployed in tandem – with both driving up to Mr Ambani’s residence the day before. The driver of the SUV – a Mahindra Scorpio – got out of that car and into the Innova after parking it at the spot from which it was later recovered.

CCTV footage from the spot showed a man in a mask and a hoodie getting out of the Scorpio.

He too has not yet been identified.

On Friday police said they had traced the owner of the SUV – which had been recently stolen.

Police also recovered a handwritten letter – written in the English script but in Hindi language – addressed to the Reliance Industries Chairman and his wife, Neeta Ambani from inside the car.

A few number plates were also recovered; the plate on the SUV was initially thought to match a vehicle that is part of Mr Ambani’s security team. However, it was later determined to be a fake.

Mumbai policemen have been posted outside Antilia since the car was found parked around 1.4 km from the building, which already had heavy security cover.

“Police have deployed police personnel across the city and are conducting searches. The vehicle has been seized for investigation. A letter has been found inside the suspicious vehicle,” Mumbai Police said on Thursday.

In a statement, Reliance Industries said: “We are thankful to Mumbai Police for their quick and immediate action. We are confident that Mumbai Police will complete their thorough investigation quickly.”

Maharashtra Home Minister Anil Deshmukh also tweeted: “Twenty gelatin explosives sticks were found in a Scorpio van in the vicinity of industrialist Mukesh Ambani’s residence in Mumbai. The Mumbai Crime Branch police is investigating the matter and the findings will be out soon.”

The 27-storey Antilia is one of the world’s largest and most luxurious private homes with three helipads, a 168-car garage, a ballroom, high speed elevators, a theatre, swimming pool, and a snow room. India’s richest family lives in the top six floors.