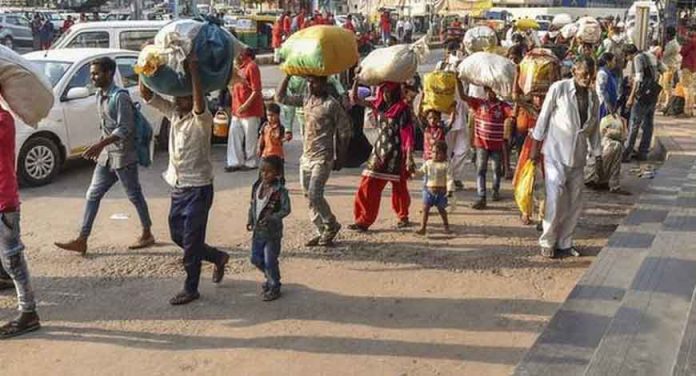 “As the endless lines for trains and buses. The tireless walk back home.”

As the nationwide Lockdown extended major migrant laborers were forced to return back to there homes after struggling to even meet their basic necessities, with no option left they have to even walk miles on their own two feet. The pictures of the migrant workers with the desperation of returning to their homes have given the chance to the opposition to attack the government.

As the major migrant unskilled sector laborer return back to there homes and as the government is planning to unlock this painfully but necessary lockdown and as the major of the corporate and medium small sectors — that has now resumed work– the shortage of labor is the main concern now. With the most labor gone back home, it would be required a lot of convincing for the government and the owners to bring these laborers back.

Ex-president of congress Rahul Gandhi spent some time with the migrants to understand their struggles while making a point that the BJP was running a government, which did not care about the poor and migrant laborers and cared only for the upper strata. The Opposition has almost unitedly reprehended the government for being heartless and not even bother to the struggles of these migrant workers.

It’s a fact which the Centre cannot deny that it has been lacking in doing enough for the migrants. And hence, it is working on a plan now to do some damage control. The government scheme for the long-term rehabilitation of these migrant workers.

The Prime Minister could divulge an App for these migrants. This App would basically sync the details of the migrant workers to the Labour Ministry and would have all the details of their qualifications and job specifications.”The entire idea is to ensure that the workers get the job as per their skills and are not under-utilized and underpaid,” a government official said.

Tabulating all the information of the workers isn’t an easy task as most of the workers are in the organized sectors and this where the role of the states comes in. The Centre through Labour Ministry and Home Ministry is in touch with the state government, asking them to give data to do a survey of the workers.

The data so collected will be fed to the main central system and will be used for also giving out the social benefits which are announced by the government.

Government official said,” It’s going to be somewhat like the ones we have for women under the “Jan Dhan Yojana“. Not just this, if at some point the workers want to go independent and begin skilled independent outlets then this app could be their ticket to central help routed through state government.

The government is starting this initiative so that it would give a reasonable reason for the migrant workers to come back. The Supreme Court has asked states and Centre to ensure that there are facilities for the workers to return back to their place of work. But not many may be confident to come back as job security is no guarantee.

As the government is trying to lure back the migrant workers with a different scheme, who were struggling for not days but months for basic essentials but as the lockdown is unlocking and many industries are now in need of these same workers; the center hopes that this app and blueprint would do the trick.

But the real question is will they come back? After suffering so much? After the government ignoring their problems? will they??