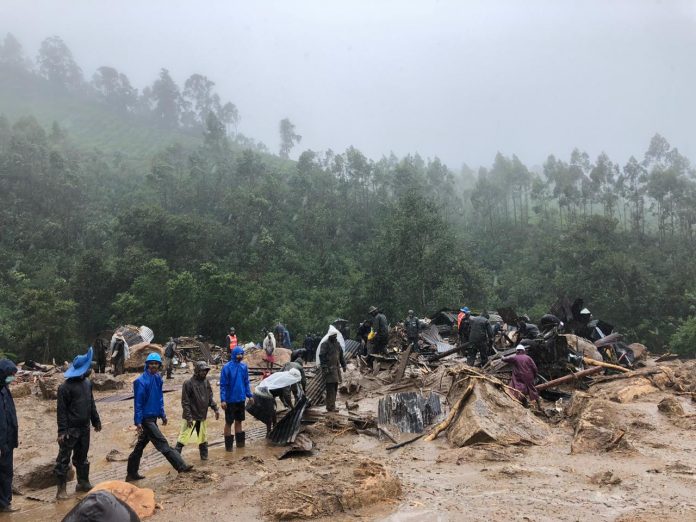 After Kochikhode Air India mishap, Kerala is yet again on the verge of another disaster. At least 27 bodies have been retrieved so far from the scrap of landslides which have flattened 20 houses of staff from tea plantations in the Idukki district of Kerala, because attempts have been made to locate the missing persons despite continuing rain.

The deaths at the landslide in the tea estate near Rajamala in the district of Idukki, in Kerala, rose up to 27 with 12 more bodies retrieved from the rubble mound and slush on Saturday. The courageous inclement weather has continued to search for 42 persons.

MM Mani, Minister of State, who camped at the crash spot, has acknowledged that survivors have no hope now. “Truly terrible is the case,” he added. In Friday, following a part of the hills of Pettimudi that erupted in the colony of tea plantation employees, there was a major landslide.

The administrative authority of the district of Idukki stated that there were likely to be less students because of the Covid lockout, which forced them to withdraw to their shanties (layams). Officials depended on the Kannan Devan Hill Plantation (KDHP) Limited employment registry, but social workers and local leaders said many of them had been out of the registry, like students and guests. Idukki collector H. Dineshan informs us, “There is some uncertainty over the exact number of citizens absent.”

“The district of Rajamalai was not vulnerable to landslide. We haven’t taken much steps here, therefore. The city was least impacted by the 2018 and 2019 floods. Throughout the past four days, electricity and contact supplies have been shut down. This rendered the condition even worse”, said Kochu Thresia, president of district Panchayat, adding heavy rains, which hit the region many times, interrupted rescue operations.

The regional office of Met said that some parts of Idukki have recorded 220 mm of rain.

The rescue and fire police was carried out by at least six members of the National Disaster Response Force.

The PM had announced a former Rs 2 lakh grace to each of the victims and the Rs 5 lakh State Government. KDHP has also declared that the individual impacted will be relieved of Rs 2 lakh.

In five districts of Idukki, Malappuram, Kozhikode, Wayanad and Kannur, the weather department has also issued a red warning. Many of the main state dams are in a flood and reservoirs swell while many regions begin to be plagued by torrential wetlands.