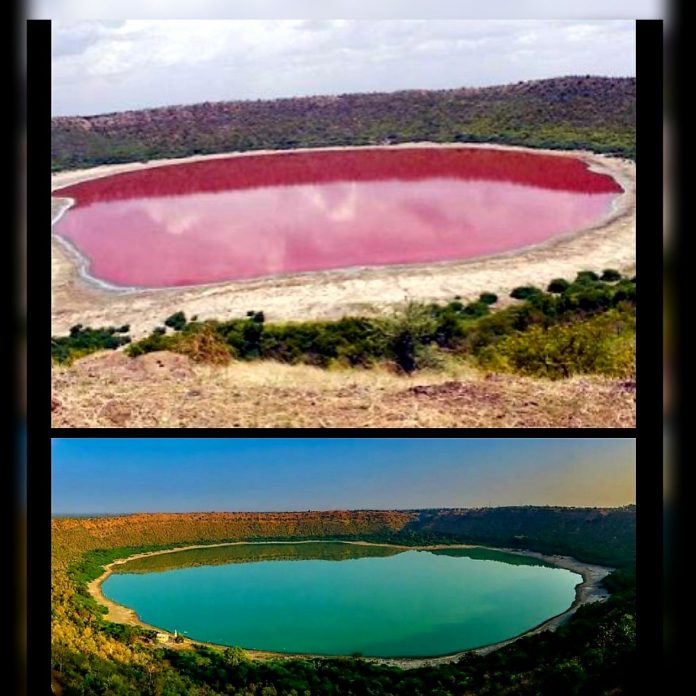 One of the major tourist spots in Maharashtra and the third crater lake in the world, Lonar Lake has mysteriously turned into pink hue from being of turquoise blue shades. This sudden change has shocked everybody including the environmental scientists.

This has instigated the scientists to look into the matter and discover the cause of the sudden change in color. Forest department has collected samples for the investigation of the unreal happening.

Lonar Tehsildar Saifan Nadf said he has been noticing changes in the color since a past couple of days. He said, “There are algae in the water body. The salinity and algae can be responsible for this change.” “There is no oxygen below one metre of the lake’s water surface. There is an example of a lake in Iran, where water becomes reddish due to increase in salinity.”

A number of reasons have been expected for the phenomenon. A probability has been assumed that the Halobacteria and fungus Salina have reacted on the highly alkaline water. The sudden weather changes and the affect of cyclone has been suspected to be another reason. However, the hue

MN Khairnar, deputy conservator of forests, Akola, gave the statement, “We are observing the phenomenon to such an extent for the first time. We will collect samples of the lake water for testing to find the reason behind the occurrence. These samples will be sent to Neeri, Nagpur, and Agarkar Research Institute, Pune.”

As stated earlier, a similar phenomena had been noticed in Umria Lake in Iran which was even documented. Reason behind the changing colour of Umria lake was due to the heat, more water evaporated due to which the salinity of water increases causing Dunaliella algae to breed in the warm alkaline water. This is what changed the color and can be a possible reason for crater lake Lonar too.

The crater was formed about a 56000 years ago when a meteorite collided with the Earth and is the world’s largest basaltic impact crater. This has now become one of the tourist attractions of Buldhana district, Maharashtra, situated in Deccan plateau.