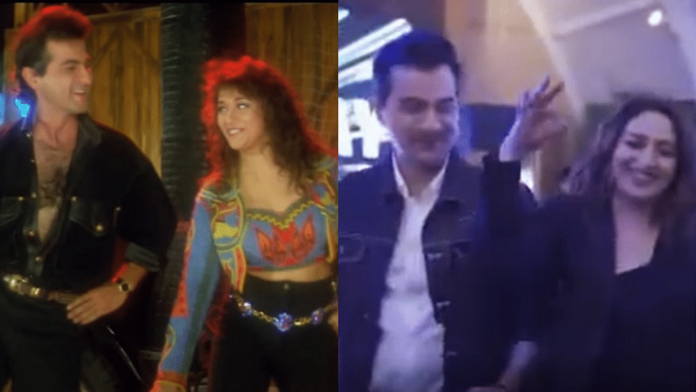 Sanjay Kapoor’s most recent post has taken us on a joyride back to the 90s. It’s a video featuring Sanjay Kapoor and Madhuri Dixit grooving to their hit number Ankhiya Milau Kabhi Ankhiyan Churau from the film Raja. Do we have to say more? The clip is from a party, which was also attended to by Genelia D’Souza, Ritesh Deshmukh, and Farah Khan. It opens to Madhuri Dixit and Sanjay Kapoor playing out the snare ventures when the two pay attention to the tunes. We can also detect Ritesh and Genelia in the frame. We just loved the way Madhuri Dixit and Sanjay Kapoor have ruled the dance floor. And, the caption is all the more relatable. “Back to the 90s. What a night,” he wrote.
Actress Neelam Kothari Soni found the video “fabb”. Sanjay Kapoor’s wife, Maheep Kapoor dropped a bunch of red hearts and clapping hands emojis to express her excitement. Farah Khan wrote, “Dhoondh hi liya tune [At last, you found the tune].” Actress Sonal Chauhan said, “OMG. This is gold.” And, we agree.

Here is the video we are talking about:

And, after watching this clip, if you are reminded of the original track then this is your stop. Why, you ask? We have it ready for you. Take a look:

Raja, coordinated by Indra Kumar, was delivered in 1995. The plot rotates around lovebirds Madhu and Raja, played by Madhuri Dixit and Sanjay Kapoor, and how they fight against all the odds to stay together.