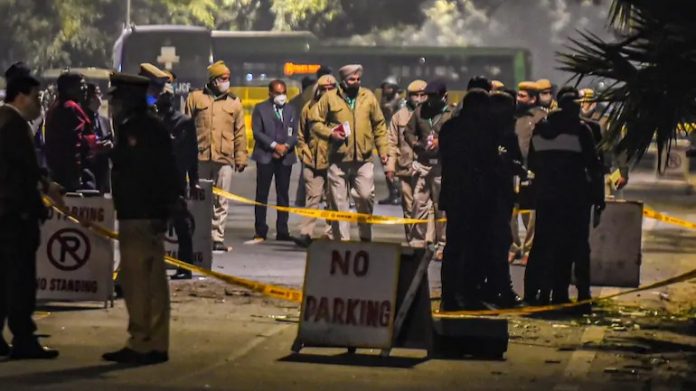 A crude bomb went off close to the Embassy of Israel on Dr APJ Abdul Kalam Road in New Delhi on Friday night, breaking the windscreens of three vehicles on the road, police said.

Nobody was injured in the blast, which took place on the 29th anniversary of the establishment of diplomatic relations between India and Israel.

External Affairs Minister S Jaishankar addressed his Israeli counterpart Gabi Ashkenazi soon after the incident and assured him of “fullest protection” to Israel’s mission and its diplomats in India.

The bomb seemed to have been planted in a flower pot on the road divider, police said. A letter in an envelope addressed “to Israel Embassy ambassador” has been found at the spot, police sources said.

Maj Gen Soleimani, who was killed in a United States drone strike in January 2020, was Iran’s most powerful general, the commander of the Quds Force of Iran’s elite Islamic Revolutionary Guard Corps. Fakhrizadeh, who was killed in November last year, was Iran’s top nuclear scientist. Tehran accepts he was killed by Israel using a controller weapon.

Earlier on February 13, 2012, Israeli ambassador Tal Yehoshua and an Indian driver of an Embassy vehicle were among four peoples injured after a magnetic bomb stuck to the vehicle went off in the capital.

An Iranian hand was affirmed in that incident as well; Iranian authorities had, however, denied the allegation.

Police on Friday night took footage from two surveillance cameras installed at one of the entry gates of the Embassy and opposite the building.

“Forensic experts have found broken pieces of a cold drink can and ball bearings from the spot. Prime facie it appears that explosives and ball bearings were stuffed in the can. It was planted in such a manner that the impact was felt towards the road. The ball bearings hit the cars. Police have not found any device or battery at the spot,” a source said.

(Delhi Police) Anil Mittal said a low-intensity improvised device went off outside Abdul Kalam Road close to Jindal House at 5.05 pm. The President, Vice-President, Prime Minister, and the three Service Chiefs were a few of kilometers away on Rajpath at the time, attending the Beating Retreat ceremony.

“No injury to any person is there, nor was any damage to property witnessed except window panes of three vehicles parked nearby. Initial impressions suggest a mischievous attempt to create a sensation,” Mittal said.

“Spoke just now to Israeli FM Gabi Ashkenazi about the explosion outside the Israeli Embassy. We take this very seriously. Assured him of the fullest protection for the Embassy and Israeli diplomats,” the Minister posted on Twitter. “Matter is under investigation and no effort will be spared to find the culprits,” he said.

On his part, Ashkenazi tweeted: “The Indian FM assured me that the Indian authorities are committed to the security of all Israeli diplomatic staff and will continue to act resolutely to locate all those involved in the explosion. I thanked him and promised full cooperation and any help required from Israel.”

In an statement, the Israeli foreign ministry said all its diplomats and embassy staff in New Delhi were “safe and sound”, and “there are no casualties and no harms was done to the (Embassy) building”.

Sources in the Indian security establishment said the bomb was made with “locally available” low intensity explosives, whose definite nature would, in any case, be determined exclusively after forensic examination. “Given the importance of the day (29 years of India-Israel relations) it appears the idea was more to send a message than to cause any real damage. However, it is a properly made IED. It appears to be the handiwork of some self-styled terror group or a lone wolf,” a senior security establishment officer said.

Sources said intelligence agencies had issued an alert on January 23 about a possible terrorist attack on Jews and Israelis from components connected to the Islamic State.

Delhi Police Commissioner S N Shrivastava visited the spot and told reporters that a case had been registered, and the issue was being investigated by the Special Cell. officials said an alert has been given at all air terminals, significant establishments, and government buildings, and improved security measures have been set up.