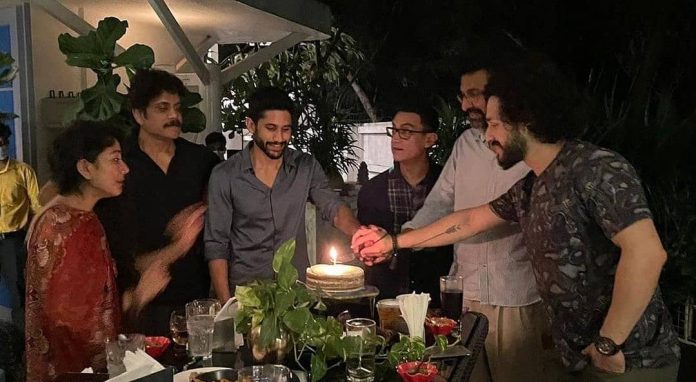 Aamir Khan attended a dinner hosted by his Laal Singh Chadha co-star Naga Chaitanya and his dad Nagarjuna in Hyderabad. Naga Chaitanya’s Love Story co-star Sai Pallavi was additionally present at the party. Naga Chaitanya’s significant other Samantha Ruth Prabhu was absent from the party. The star couple often finds a spot on the trends’ list for speculation over their relationship status – according to reports, Naga Chaitanya and Samantha are headed for a split. The photos from the party are going viral on social media and have been shared by several fan pages.
This is the picture we are talking about:

Samantha Ruth Prabhu and Naga Chaitanya, co-stars of movies like Manam, Ye Maaya Chesave, and Autonagar Surya, got married in 2017. The couple had two weddings – one as per South India ceremonies went before by a Christian wedding.

The speculations about the couple’s split started when Samantha Prabhu Ruth dropped her surname Akkineni on social media. The actress changed her display name on Instagram and Twitter to ‘S’. In an interview with Film Companion, she addressed the hype around her name change and said, “The thing is, even with trolling for The Family Man or this, I don’t react to them. That is how I have always been. I don’t react to this kind of noise and I don’t intend on doing so as well.”