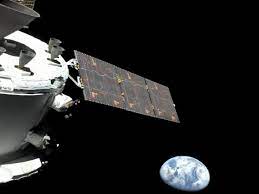 Nasa’s Artemis rocket has effectively shown up on the moon after at long last launching from Earth the week before. As indicated by a BBC report, the Orion container cleared 130km (80 miles) over the lunar surface, and it will currently start to enter a bigger circle. The vehicle was beyond reach for 34 minutes during this move, which started at 12:44 GMT, or 6:14 pm IST, as it occurred on the most distant side of the Moon.

The airplane additionally sent back pictures of Earth looking incredibly small like a ‘light blue dab’ from 230,000 miles( 370149.12 km) away.

NASA flight chief Zebulon Scoville said: “This is one of those days that you’ve been pondering and dreaming about for a significant length of time. “Today, we just saw the Earth set behind the Moon as we take the following human-evaluated vehicle around the Moon, getting ready to bring people back there in a couple of years. This is a distinct advantage.”

Before that, NASA likewise shared a progression of dazzling Orion selfies on Saturday, showing the human-evaluated container flashing against the murkiness of the room.

It will be whenever a space-first case has finished a flyby of the moon in 50 years. Artemis I is an uncrewed mission intended to test NASA’s Space Send-off Framework rocket and the Orion space apparatus before space explorers go for a ride on a future mission. On the off chance that the mission is effective, Artemis I will be trailed by a human outing around the moon in 2024 (Artemis II) and could prompt the main lady and first ethnic minority to arrive on the moon the year later.

Howard Hu, the Orion program chief, said last week’s send-off was a ‘notable day for human space flight. He told the BBC: ”It’s the initial step we’re taking to long haul profound space investigation, for the US as well as for the world. I think this is a noteworthy day for Nasa, but at the same time a memorable day for everyone individuals love human space flight and profound space investigation”.