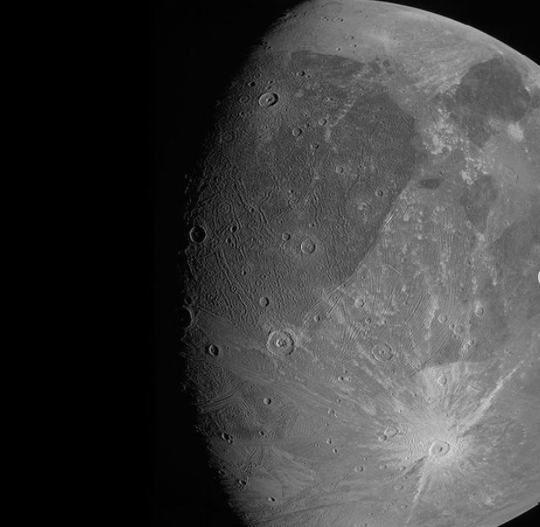 NASA’s Juno spacecraft has obtained the first images of Ganymede, Jupiter’s biggest moon, as it flew by the icy moon on Monday. Juno is the only second spacecraft to fly by Ganymede in two decades. NASA has shared two pictures on its Instagram handle, which give us a closer and detailed view of the surface of the only moon in our solar system that’s bigger than the planet Mercury. The pictures — one captured from Jupiter orbiter’s JunoCam imager and the other from its Stellar Reference Unit star camera — reveal the finer details, including craters and clearly distinct dark and bright terrain of Ganymede.

The space agency said that Juno’s flyby was the closest a spacecraft had gotten to Jupiter’s giant moon in 20 years. “At the time of its closest approach, Juno was within 645 miles (1,038 kilometres) of Ganymede’s surface,” NASA said in the Instagram post.

The spacecraft’s JunoCam visible-light imager, using its green filter, captured almost an entire side of the water-ice-encrusted moon. NASA said on its website that later when versions of the same image come down incorporating the camera’s red and blue filters, imaging experts will be able to provide a colour portrait of Ganymede. The spacecraft will be sending more images in the days to come.

Juno’s Stellar Reference Unit navigation camera obtained the image of the dark side of the giant moon on June 7 during its flyby.

Heidi Becker, Juno’s radiation monitoring lead at JPL said that the conditions in which this image was collected were ideal for a low-light camera like the one they used. “So, this is a different part of the surface than seen by JunoCam in direct sunlight. It will be fun to see what the two teams can piece together,” Becker said.

Juno’s encounter with the Jovian moon is expected to yield insights into its composition, ionosphere, magnetosphere, and ice shell. It is also expected to provide measurements of the radiation environment that will benefit future missions to the Jovian system.

According to information on NASA’s Juno Overview page, the principal goal of Juno is to understand the origin and evolution of Jupiter.

The space agency says that under its dense cloud cover, Jupiter safeguards secrets to the fundamental processes and conditions that governed the solar system during its formation. The planet can also provide critical knowledge for understanding the planetary systems being discovered around other stars.