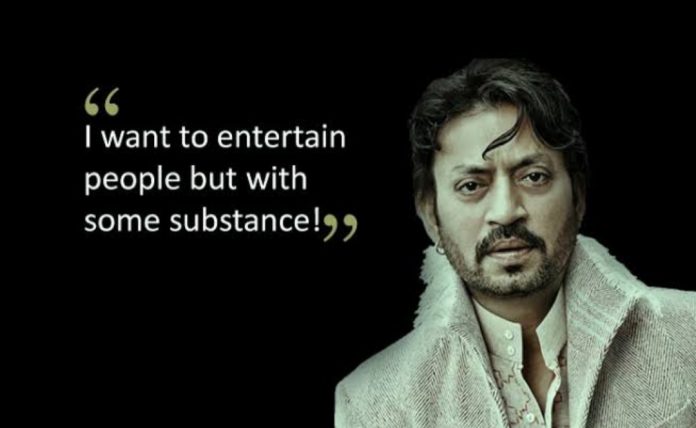 An actor who was known for his versatility and for giving it all to the Indian cinema couldn’t deliver more of his masterpieces. Irrfan khan passed away yesterday at Kokilaben Hospital in Mumbai due to a colon infection. He had been battling with cancer since 2018 but didn’t give up at any point in life. He came back stronger than ever and made a comeback in the film “Angrezi Medium” but sadly that turned to be the last of his best works.

He made his debut with Salaam Bombay in 1988 but that didn’t give him fame. But his pathbreaking acting in Hasil and Maqbool made him an actor to look up to. Then he went on with brilliant acting in critically acclaimed films one after the other. The Namesake, Life in a Metro, The Lunchbox, Piku, Life of Pi to name a few. He received his national award for the film Paan Singh Tomar.

Here are some roles which will forever be remembered: –

An actor who never wanted fame and success. He wanted Indian cinema to thrive. He wanted the content to rule the box office. With everyone coming together to pay him tribute and reminiscing his scenes, he must be smiling from heaven as his dream came true. This shows the power of a good artist. “Its easier to surrender to confinement” but he fought. He fought for Indian cinema, for his own life, and to deliver some powerful acting.