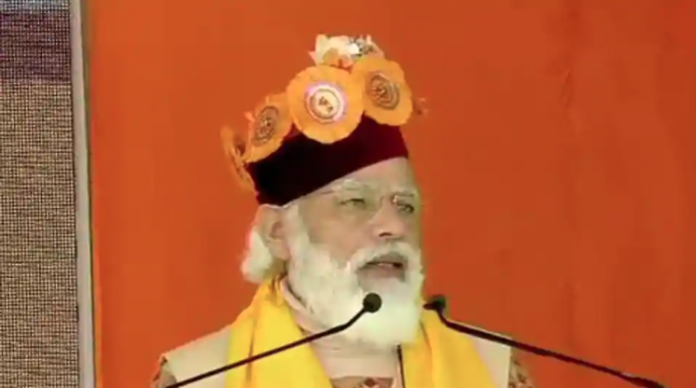 Prime Minister Narendra Modi on Saturday took a jibe at the previous Congress-led United Progressive Alliance (UPA) government for its lack of focus on the development of border infrastructure and compromising with the country’s security, as he especially mentioned the Daulat Beg Oldi airstrip in Ladakh, where India is witnessing a border stand-off with China.

PM Modi said, without naming the Congress party, during the inauguration of Atal Tunnel in Himachal Pradesh, that the previous government must explain the reason the Daulat Beg Oldi airstrip remained closed for nearly 50 years. He inaugurated the 9.02km long Atal Tunnel, which will connect Manali to Lahaul-Spiti valley in the state.

“Many other important projects were treated in the same way as Atal Tunnel. The strategically important Daulat Beg Oldi airstrip in Ladakh remained closed for 40–45 years. I do not want to go into details about the helplessness and the pressure behind it,” Modi said adding that the country had seen a phase in which strengthening of border infrastructure was deliberately delayed.

The Prime Minister also asked why the previous government lacked the political will to open the airstrip at the Daulat Beg Oldi as he said his government is now concentrating on border development. “Security of the country is of prime importance for the Union government and the creation of border infrastructure is one of its top priorities. There was nothing more important for us than protecting the country. But the country has also seen a period when the defence interests of the country were compromised,” Modi said.

“Connectivity has a direct connection with the development and economic progress of the people. We also know that connectivity in border areas is directly related to security-related issues of the country. The Union government is giving utmost emphasis on the development of border infrastructure and its benefits are being extended to the common people as well as our armed forces personnel,” PM Modi said.

He also said that the previous governments had deliberately delayed the construction of Atal Tunnel. He also pointed out that if the work had continued at the same pace on the project, it would have been completed in 2040.

“We completed the work in just six years that would have taken 26 years. Atal ji laid the foundation stone of the approach road of this tunnel in 2002. Till 2013-2014, progress was made only on 1,300 meters of this tunnel. After 2014, the project progressed with unprecedented pace,” PM said.

Prime Minister Modi said the Atal Tunnel has not only realised Bharatiya Janata Party (BJP) leader Atal Bihari Vajpayee’s dream but has also ended the decades-long wait of the people of Himachal Pradesh.

The tunnel, which the Prime Minister said will also become the lifeline for Leh-Ladakh, will remain open throughout the year as opposed to the valley being cut off for about six months every year amid heavy snowfall.

Hailing the Make in India move, Modi said big reforms have been introduced to ensure modern weapons are produced in the country. After a long wait, the chief of defence staff is now part of the system. According to the requirements of the Indian Army, better coordination has been established in both procurement and production, Modi added.

The Prime Minister also pointed out that work on another bridge Kosi Mahasetu, the foundation of which was laid by Vajpayee in Bihar, has been expedited since 2014 as the Modi government came into power.

The Rs 3300 crore-Atal Tunnel, named after former prime minister, reduces the road distance by 46km between Manali and Leh and the travel time by about four to five hours. The tunnel has been built with ultra-modern specifications in the Pir Panjal Range of the Himalayas at an altitude of 3,000 metres from the mean sea level.

The single tube double lane tunnel with a roadway of 8 metres and an overhead clearance of 5.525 metres is horse-shoe shaped and has been designed for a traffic density of 3,000 cars per day and 1,500 trucks per day with a maximum speed of 80 km/hr, according to a statement by the Prime Minister’s Office.

Jairam Thakur said on Friday that around 200 people were expected to attend the event in Manali. The PMO said Modi will participate in public functions at Sissu in Lahaul Spiti and at Solang Valley after attending the inauguration function at South Portal, Manali. Rajnath Singh had on Friday inspected the Atal Tunnel along with chief minister Thakur and Thakur.