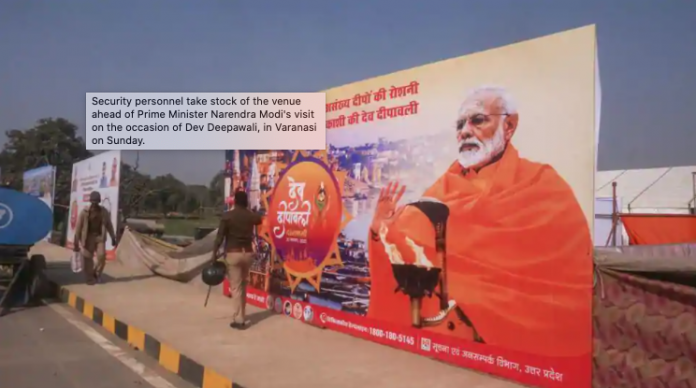 Prime Minister Narendra Modi will visit Uttar Pradesh’s Varanasi on Monday to launch the Varanasi-Prayagraj highway project and participate in Deepotsav celebrations at the Ganges ghats.

As the city prepared for the Prime Minister’s visit, security personnel, along with the dog squad, were seen checking boats at the ghats. They were thoroughly checking other locations near Rajghat as well, according to news agency ANI.

Modi will inaugurate the six-lane widening project of the Handia (Prayagraj) – Rajatalab (Varanasi) section of National Highway 19 during his visit. The 73-km stretch of the newly widened and six laned NH19, made with a total outlay of Rs 2447 crore, is expected to reduce the travel time between Prayagraj and Varanasi by one hour, the Prime Minister’s office said in a statement.

Devotees perform ‘aarti’ at Dashashwamedh Ghat on the banks of River Ganga, ahead of Prime Minister Narendra Modi’s visit to Varanasi on Sunday. ( PTI Photo )

The Prime Minister will also attend Dev Deepawali, a festival of light and fervour in Varanasi celebrated on every Poornima of the Kartik month, i.e. on the full moon of the Hindu calendar month Kartika — 15 days after Diwali. PM Modi will light an earthen lamp on the Raj Ghat of Varanasi, which will be followed by lighting of 11 lakh diyas on both sides of River Ganges.

An illuminated view of Ghats of river Ganga ahead of Prime Minister Narendra Modi’s visit in Varanasi on Sunday. ( ANI Photo )

During the tour to his parliamentary constituency, the Prime Minister will also visit the Kashi Vishwanath Temple Corridor Project site to review its progress. He will also see the light and sound show at the archaeological site of Sarnath, which he had inaugurated earlier this mont