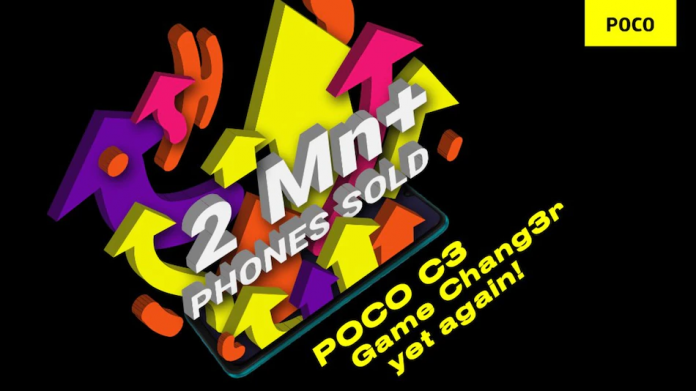 Poco C3 has crossed the 2,000,000 deals mark in India, the organization said in a tweet referring to its inside information. Poco had presented the phone in India in October last year. The budget handset crossed the two-million sales milestone within nine months of launch, according to the company. It had earlier posted about crossing the one-million sales mark in a little over three months after its launch. Poco C3 is powered by the MediaTek Helio G35 SoC, has triple rear cameras, and features a waterdrop-style notch display.

Poco was launched in 2018 as a sub-brand of Xiaomi and was reported as an autonomous brand in India in mid-2020. In November last year, it turned into a free personality all around the world, 10 months after its Indian auxiliary got isolated from Xiaomi. The brand initially gained popularity among young smartphone customers, thanks to the success of the Poco F1 that debuted as the first phone under the Poco label.

The Poco C3 is valued in India at Rs. 7,499 for the 3GB RAM + 32GB capacity choice and Rs. 8,499 for the 4GB RAM + 64GB storage option. It comes in Matter Black, Lime Green, and Arctic Blue shading choices. Poco has also introduced an offer for Flipkart Plus members, wherein they can buy the Poco C3 from Rs. 6,749 thanks to the 10 percent instant discount on ICICI and Axis Bank cards.

Poco C3 specifications
On the specifications front, the Poco C3 runs on MIUI 12 for Poco, based on Android 10. It features a 6.53-inch HD+ (720×1,600 pixels) display with a waterdrop-style notch. The phone is powered by an octa-core MediaTek Helio G35 SoC, coupled with up to 4GB of RAM. It comes with a triple rear camera setup that houses a 13-megapixel primary sensor. For selfies and video chats, the phone comes with a 5-megapixel camera at the front.

In terms of storage, Poco C3 has up to 64GB of onboard storage that is expandable via a microSD card (up to 512GB). It packs a 5,000mAh battery that supports 10W fast charging.