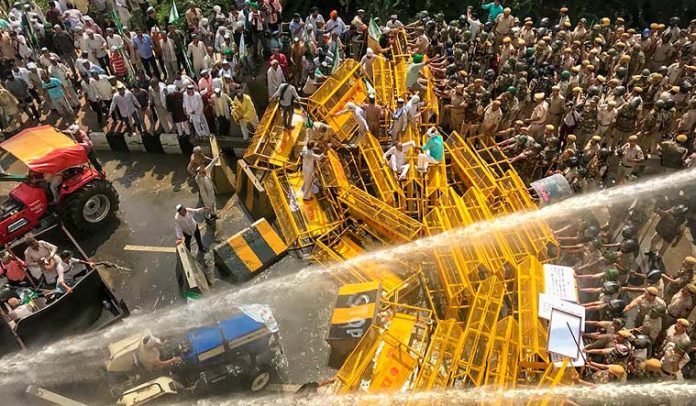 After their Delhi Chalo March to protest the Center’s farm laws came a cropper because of heavy barricading by Haryana Police on Wednesday, Punjab’s Farmers unions have changed their strategy of taking only the highways to the national capital. They plan to enter Haryana through different routes on Thursday morning.

While activists of the Bharti Kisan Union Ekta-Ugrahan and Sidhupur groups have been camping on the Punjab-Haryana border at Khanauri and Moonak, respectively, in Sangrur district since Wednesday evening, other farmers unions have changed their plans and decided to set out toward Delhi from other entry points. Members from the Kirti Kisan Union, BKU Kadian and Rajewal groups plan to Assemble at Mastuana Sahib in Sangrur and head for Shambhu border at 11am.

“Members from the BKU Ekta-Ugrahan and Sidhupur have already occupied borders in Sangrur so we have decided to march to the Shambhu border in neighbouring Patiala,” said Bhupinder Singh Longowal, a state committee member of the Kirti Kisan Union. Gurmeet Singh Bhattiwal, the District cheif of BKU Dakaunda, said that their unit and other farmer outfits will march to Haryana on the Samana-Chika route from Patiala District.

Gobinder Singh, the Sangrur block cheif of BKU Ugrahan, said 80 tractor-trailers and 10 buses will head for Khanauri border where farmers will make a determined bid to enter Haryana en route to the national capital.