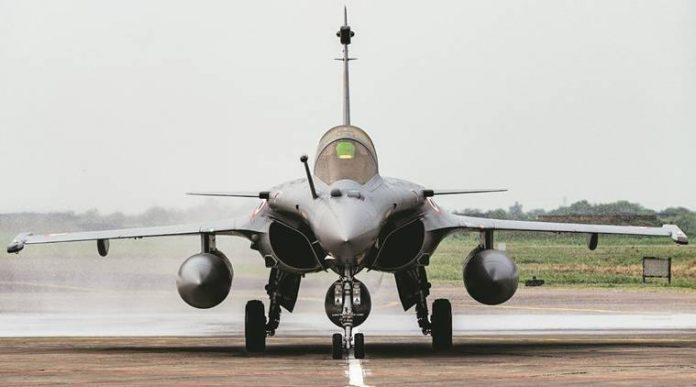 India’s Defence Minister Rajnath Singh along with his French counterpart Florence Parly attended the induction ceremony to be held at Ambala Air Force Station in Haryana.

In a mega ceremony in Ambala, the first batch of 5 Rafale fighter jets were indicted into IAF after traditional ‘Sarva Dharma Puja’, air display and Sarang aerobatic team’s performance.

The induction program includes ceremonial unveiling of the Rafale aircraft, a traditional ‘sarva dharma puja’, air display by Rafale and Tejas aircraft as well as Sarang aerobatic team. A traditional water cannon salute was also given to the fleet of french birds before they are inducted into the Indian Air Force.

The induction of Rafale combat jets in India marks the beginning of a new era in the history of Indian Military. The initial five of the 36 best-in-class Rafale fighter jets which flew out from the Dassault Aviation’s Merignac facility base in French port city of Bordeaux, Landed at the Indian Air Force’s ‘Golden Arrow’ Squadron at Ambala, Haryana on July 29.

Amid the ongoing dispute with China, Rafale would be a game changer in the current scenario as India is involved in border tension with the Dragon in eastern Ladakh as it will increase India’s air power manifold.

The Rafales armed with the air-to-air Meteor, air to ground SCALP, and Hammer missiles are expected to give an edge to the Indian Air Force over its traditional adversaries China and Pakistan in the South Asian skies because of its long-go hit capabilities.

These omnirole aircraft are capable of interdiction, ground support, aerial reconnaissance, in-depth aerial strikes, anti-ship strikes and even carrying out nuclear attacks (if the military conflict escalates to a nuclear conflict).