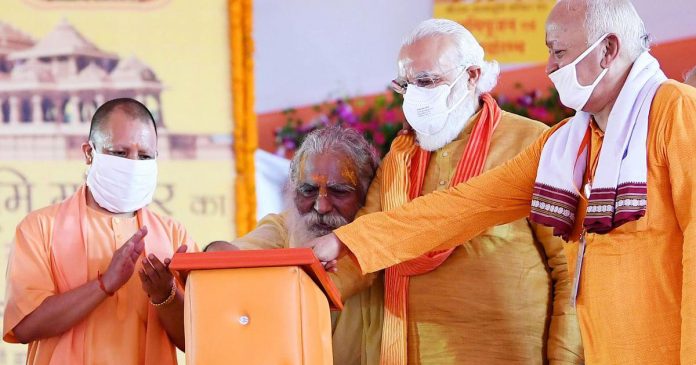 Mahant Nerityagopal Das, the man who leads the Shri Ram Janmabhoomi Teerth Kshetra, the trust for constructing the Ram Mandir in Ayodhya, Uttar Pradesh, has been checked positive for COVID-9. The breaking news is that our Prime Minister was also seen sharing the same stage with him during the Bhoomi Poojan ceremony. Now what can be diagnosed from this situation?

The set up was like that, Bhoomi Poojan ceremony was going on the stage set up for the occasion of Ram Mandir foundation. Governor of Uttar Pradesh, Anandiben Patel, Chief Minister of Uttar Pradesh Yogi Adityanath, and chief of Rashtriya Swayamsevak Sangh, Mohane Bhagwat were also present.

He was reported to struggle from breathlessness and fever on Thursday morning after which the Chief Medical Officer (CMO) Dr. Mishra and Dr. Sanjeev Yadav, Mathura, arrived the temple to attend to him.

The Uttar Pradesh government said today that the Chief Minister talked to the District Magistrate of Mathura and advised Dr Trehan of the Medanta hospital to provide the priest with urgent medical treatment.

“Honorable CM has taken details of the health status on Mahant Nitiya Gopaldas ji who has been tested positive for Covid . He has spoken to DM Mathura and his followers and to Dr Trehan of Medanta and requested for immediate medical attention for Mahantji at Medanta. He has directed DM Mathura to provide all possible support for providing best possible medical attention,” the statement read.

“The Mahant tested Covid-19 positive following a rapid antigen detection (RAD) test. An advanced life-support-equipped ambulance was organised to shift him to Medanta Multi Speciality Hospital. In Mathura, he was attended to by CMO Dr Yadav and a team of doctors. Later, Mathura city magistrate Manoj Kumar Singh and the circle officer accompanied him to the hospital. The ambulance left Mathura for Gurugram at around 12:45 pm,” DM Mishra said.

“Fever is normal as of now. He was having some slight breathing issues. Nothing serious as of now. He underwent an antigen test and was found positive. The chief minister has asked authorities to shift him to Medanta Hospital. He is stable,” said DM Sarvagya Mishra.

The Prime Minister established the foundation last week in Ayodhya for the Ram Mandir.

Modi rendered his indelible marks for what he called a defining moment in the history of the nation after his success of bhoomi pujan for the temple — the end of a campaign which led to the BJP’s rise and marked their key commitment to their electors.