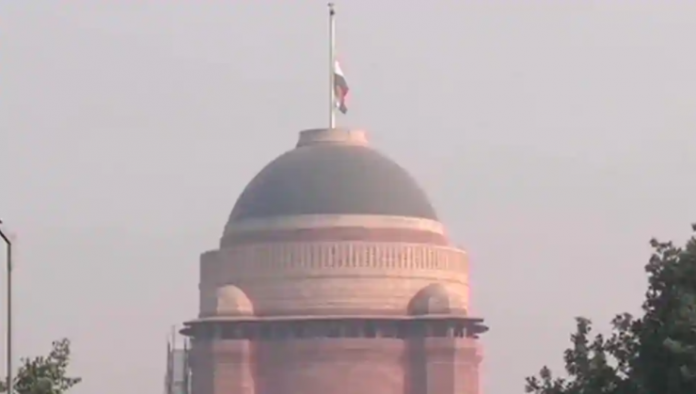 The national flag was flown at half mast in Delhi and Capitals of all States and UTs as a mark of respect to Cabinet Minister Ram Vilas Paswan, who passed away on Thursday.

The Union Ministry of Home Affairs (MHA) issued a notification in this regard on Thursday, after the minister died at a hospital in New Delhi, saying that the flag would be flown at half mast on the day and at the place where his funeral takes place. State Funeral will be accorded to Paswan, the MHA said.

Paswan, founder of Lok Janshakti Party (LJP) and one of the most noted Dalit leaders of the country, passed away at the age of 74 after undergoing a heart surgery a few days ago. He had been in active politics for more than five decades.

LJP chief and his son Chirag Paswan broke the news on Twitter. “Papa …. Now you are not in this world but I know you are always with me wherever you are. Miss you Papa…,” he tweeted, with a throwback photo of his father hugging him.

Prime Minister Narendra Modi and union home minister Amit Shah were among the many politicians who tweeted their condolences to the departed leader’s family.

“I am saddened beyond words. There is a void in our nation that will perhaps never be filled. Shri Ram Vilas Paswan Ji’s demise is a personal loss. I have lost a friend, valued colleague and someone who was extremely passionate to ensure every poor person leads a life of dignity,” Modi said in his condolence message.

“Shri Ram Vilas Paswan Ji rose in politics through hardwork and determination. As a young leader, he resisted tyranny and the assault on our democracy during the Emergency. He was an outstanding Parliamentarian and Minister, making lasting contributions in several policy areas,” he said in subsequent tweet.

“Modi government will be committed to fulfill his dream of the welfare of poor and development of Bihar. My condolences to his family and supporters. I pray for the peace of the departed soul,” Amit Shah said.