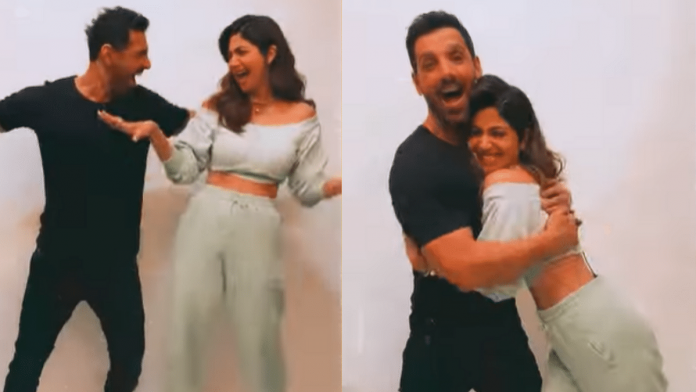 Shilpa Shetty and John Abraham in a video together. On Monday evening, Shilpa Shetty shared a video of herself dancing with John Abraham and it has our heart. In the video, the stars should be seen dancing to the track Shut Up And Bounce from the 2008 film Dostana, which featured Shilpa, John, and Abhishek Bachchan. Sharing the super cool video, Shilpa Shetty wrote: “The reunion we didn’t know we needed.” She added the hashtags #reelitfeelit, #reelsinstagram, #explore, #shutupandbounce, #friends, #instagramreels, #shapeofyou and #PintolaShapeOfYou.

John Abraham has many projects lined up. The first one is Attack, co-starring Rakul Preet Singh and Jacqueline Fernandez The actor traveled to Spain recently for the shoot of Pathaan with Shah Rukh Khan and Deepika Padukone. He will also star in Ek Villain Returns with Arjun Kapoor, Disha Patani, and Tara Sutaria. The actor was most recently seen in Satyameva Jayate 3.

On the work front, Shilpa Shetty was most recently seen in Hungama 2, co-starring Paresh Rawal, Meezaan Jaaferi, and Pranitha Subhash. She was also seen as one of the judges on the TV reality show Super Dancer Chapter 4, alongside choreographer Geeta Kapoor and filmmaker Anurag Basu. The actress will next be seen in Sabbir Khan’s upcoming film Nikamma.

Shilpa Shetty stepped into Bollywood with the 1993 thriller Baazigar, which also included Kajol and Shah Rukh Khan’s lead roles. She is best known for her performances in films such as Main Khiladi Tu Anari, Dhadkan, Life In A…Metro, Apne, to name a few.