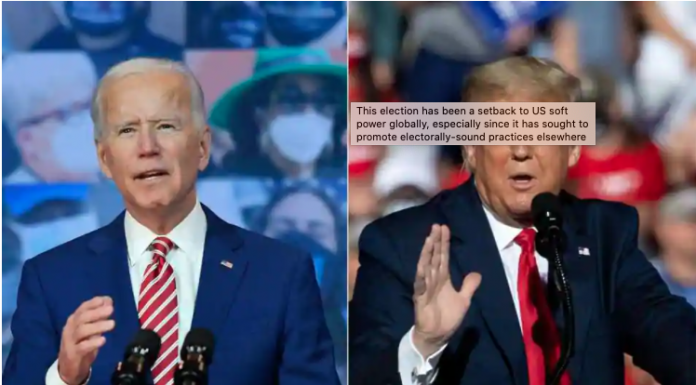 The United States (US) presidential election has turned out to be another nail-bitingly close race. Normally around midnight, after the elections, one candidate concedes based on trends emerging through counting, media analysis and projections, and the other appears thereafter to thank his supporters, and promises to be a president for all Americans.

This time, however, had the unusual spectacle of Joe Biden declaring that his supporters should remain patient and that he had a clear track to victory. Donald Trump, appearing soon thereafter, declared that he had won based on trends so far, and that he would approach the US Supreme Court (SC) to prevent further counting.This Trump strategy has been long in the making. Given his personality, he is unable to publicly accept that he is less than the best.

Democratic strategy has been to get more people, especially minorities and African-Americans to vote, since they tend to support Democrats, and benefit from polices of inclusion and equity. Republican strategy, especially in the face of a progressively dwindling share of the White voter base, has been to make it difficult for such groups to register or vote.

In the run-up to this election, Democrats encouraged people to vote early or vote by mail, on account of the Covid-19 pandemic. More than 100 million Americans took this route, nearly two-third of the total vote in 2016. Recognising that this vote would heavily lean Democratic, Trump had been repeatedly suggesting that there is fraud in mail-in voting, and had also begun demanding that vote results should be declared on Election Day itself. This would disenfranchise mail-in voters in states such as Pennsylvania, where such votes are not processed before Election Day.

It was widely anticipated that Trump would seek recourse to courts, hoping that his judicial appointees, including in the SC, would tilt the balance in his favour. Both sides are reported to have readied armies of lawyers. Last time, the SC had so intervened in 2000, when it ruled a stop to counting of votes in Florida around 30 days after the voting, and George W Bush was declared winner.

The potential for legal challenges is exacerbated by the fact the US does not have a federal-level Election Commission. Each state has its own responsibility, with varying procedures for registering, voting and counting. Recently, Republicans had tried to disqualify drive-in voting in one Texas area, but their plea was disallowed by a state and then a federal court. Also, official results are declared much later, after verifying and certification. What everyone sees and accepts initially as the result is only the projection done by two competing media aggregates, though based on professional data analysis. It can be expected, based on the present situation, that a non-contested result of the elections is unlikely.

This would also be a setback to US soft power globally, as it has sought to promote democratic and electorally sound practices elsewhere, and has called out incumbents in other countries who have refused to concede easily or transfer power.

The manner in which this plays out will have consequences for US domestic politics, as well as its global standing and strategies.

Trump and Biden brought sharply different approaches to domestic issues. Trump had sought to play down the impact of Covid-19 to deflect from his administration’s failure in controlling its spread; Biden advocated for science-based restrictions. Trump had continued to deny global warming, and worked for easing environment-focused regulations on industry, including drilling for oil and gas; Biden promised transitioning away from oil to renewable energy, and rejoining the 2015 Paris climate accord. With the Barack Obama presidency leading not to a post-racial society, but a sharpening of White antagonism which has been fanned further under Trump, the two defined themselves differently on issues of police discrimination, the manner of law and order enforcement, and recent protests and violence in several cities in the US.

There was less divergence on specific international issues, but a basic difference of approach on America First versus global engagement, and dealing with allies and partners. On China, the broad consensus in the US now is that the earlier expectation of deepened engagement leading to political and economic liberalisation had failed, especially under Xi Jinping, and the country was now a peer economic, technological and military rival, with aspirations for global leadership, norms and rule-setting. But whatever the outcome, the broad positive trajectory of the US- India relationship is expected to be sustained.

The US-India relationship continued to consolidate under Trump. His administration placed India under STA-1 (Strategic Trade Authorization Level 1) for technology releases on par with the US’s closest allies and partners. He started the 2+2, the joint foreign- and defence ministers- level dialogue in 2018, which just concluded on October 27, its third meeting with significant new decisions on sharing of geospatial information, collaboration between militaries and defence industry. He visited India in February, and travelled to Houston in September last year to address a joint rally of 50,000 Indian-Americans with visiting Indian prime minister.

With Biden as vice-president, the Obama administration had declared support for India’s permanent membership of United Nations Security Council, and designated it as a major defence partner to enable higher level technology releases. Biden visited India in 2013; he called for removal of sanctions against India as Chair of Senate Foreign Relations Committee in 2001; and as ranking member in the same Committee in 2008, he worked to see the path-breaking India-US civil nuclear cooperation agreement through the US Senate.

India will need to navigate the next four years, mindful of stresses and trends within US society, and its resulting foreign policy compulsions.