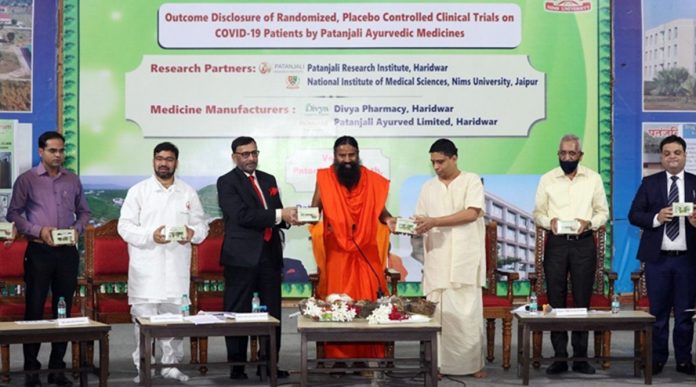 Baba Ramdev’s Pantanjali came up with the claim that their newly launched Ayurvedic medicine Coronil is a cure of the yet invincible novel coronavirus when the doctors, researchers, and scientists around the globe are struggling. Coronil can cure the virus within 3-14 days and if it is so, the world wouldn’t be happier and India wouldn’t be prouder enough.

Coronil was launched on the 23rd of June, 2020 and was sent to every Patanjali store in India. It was highly advertised where Yoga Guru Ramdev himself showed up in almost every Press Conference and media house. Then why did the advertisements and brand promotions drop suddenly?

Patanjali did claim big but apparently their claims were based on a few blurred facts. Now, Indian Council of Medical Research(IMCR) which takes care of the Covid-19 related medicine and Ayush Ministry were contacted who revealed that none of them gave a licence for the medicine and hence they wouldn’t comment on the effectiveness of the medicine.
The Uttrakhand government gave the liscence to the Ministry but the truth is, they never gave a permit to any “corona related medicine.” All they were asked to review was an Immunity boosting medicine which treats cough and cold.

As per Patanjali’s application, we issued them license. They didn’t mention coronavirus, we only approved license for immunity booster, cough & fever. We’ll issue them a notice asking how they got permission to make the kit (for COVID19): Licence Officer, Uttarakhand Ayurved Dept pic.twitter.com/I7CWKoJhbK

Just after that, Ayush Ministry issued a notice to Patanjali to submit the research papers which they did. The ministry will go through the medicine and its research in details and then take the final call.
Ayurveda, Yoga & Naturopathy, Unani, Siddha and Homoeopathy Ministry which is the apex body of Ayurveda in India also stated that they were not informed about the facts if Coronil was being manufactured.
Patanjali’s CEO Aacharya Balkrishnan who made the medicine with the help of National Institute of Medical Sciences did speak up about the situation. He said that they’ve followed all the necessary procedures and have applied for the licence based on classical evidence of the compounds used in the medicine. They have worked on the compound and put out the results of the clinical trails.

We’ve followed all procedures to manufacture the medicine (Coronil). We applied for the licence based on classical evidence of the compounds used in the medicine. We worked on the compounds&put out the results of the clinical trial before people: Patanjali CEO Acharya Balkrishna pic.twitter.com/QfQ0nir5hE

However, the patients used for the experiment were either mildly symptomatic of asymptomatic which doesn’t justify if the medicine will work on patients with moderate or high symptoms. This is why AYUSH Ministry has ordered Patanjali to stop product promotion and advertising.
Now this situation has infuriated public because they saw this medicine as a sigh to rely from the situation. Devastated by the news Rajasthan police has filed a case against Patanjali and its government has given their stance that they won’t allow the medice unless the Ayush Ministry gives their clearance.

The Corona kit offered by Patanjali costs ₹545 and consists of Coronil, Shwasari and Anu Tel.

Let us hope for the Ministry to give a green flag to the medicine. It won’t only be one of the greatest Indian successes but also will be a lifesaver for millions.