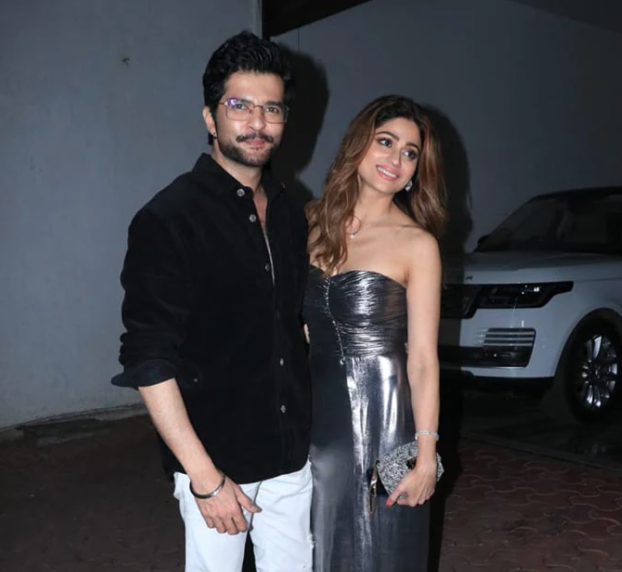 So Shamita Shetty turned a year older on Wednesday and she did it in style. On her 43rd birthday, the actress’ fans, friends, and family members wished her. Her boyfriend and TV actor Raqesh Bapat wished her a super cute post. He shared pictures from the actress’ birthday eve celebrations on his Instagram profile and he wrote: “Happy Birthday love.” Their smiles say it all in the pictures. For her special day, Shamita Shetty added a dash of bling with a silver outfit and she looked stunning.

Shamita Shetty and Raqesh Bapat found love on the sets of Bigg Boss OTT, where they were participants. Later, Raqesh appeared as a wildcard entrant on Bigg Boss 15, where Shamita was one of the finalists. However, he had to quit the show due to health issues.

Shamita Shetty and  Raqesh Bapat were clicked at the actress’ residence on her birthday eve on Tuesday. The couple happily posed for the paparazzi stationed outside her house.

After the Bigg Boss 15 finale, Raqesh Bapat shared a post for Shamita Shetty, who was in the top 4. Tejasswi Prakash won the show. He shared a happy picture with her and wrote: “Learning, unlearning, and learning again is a circle of our existence where victory is subjective but growth is certain. You experienced, you learned, you evolved and you won almost everyone’s heart. I am so proud of you.”

Shamita Shetty is best known for her performances in Mohabbatein, Mere Yaar Ki Shaadi Hai, and Zeher. She has also participated in reality shows like Bigg Boss 3, Bigg Boss OTT, and Jhalak Dikhhla Jaa 8. She also starred in the web series Black Widows, alongside Swastika Mukherjee and Mona Singh.