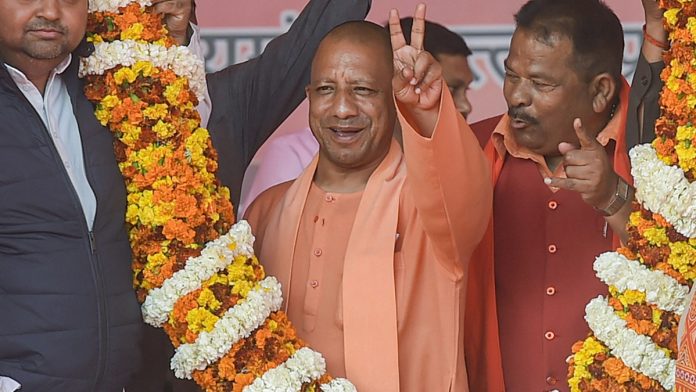 Yogi Adityanath on Friday took oath as the chief minister of Uttar Pradesh for the second time at the Bharat Ratna Atal Bihari Vajpayee Ekana Cricket Stadium in Lucknow.

Prime Minister Narendra Modi, home minister Amit Shah, defense minister Rajnath Singh were among the top BJP leaders present at the mega swearing-in ceremony. Adityanath was administered oath by Governor Anandiben Patel at the jam-packed stadium. He was a Member of the Parliament from the Unnao Lok Sabha seat from 2004 to 2009.

Keshav Prasad Maurya took oath as the deputy chief minister for the second time. The BJP leader has been held in the UP cabinet despite losing election from the Sirathu constituency. Associated with Rashtriya Swayamsevak Sangh (RSS) and Vishva Hindu Parishad (VHP)- Bajrang Dal, Maurya had won the 2014 general elections from the Phulpur parliamentary constituency of Prayagraj district.

Brajesh Pathak, who served as a cabinet serve in the past Yogi Adityanath government, is now the second deputy chief minister replacing Dinesh Sharma. A prominent Brahmin leader of the party, he won the Assembly polls from the Lucknow Cantonment seat in the 2022 state Polls.

In 2017, Pathak jumped from Bahujan Samaj Party and joined the BJP within the presence of Home Minister Amit Shah and Union Minister Mahesh Sharma.

Previous Uttarakhand governor Baby Rani Maurya is among the new inductees in the Yogi cabinet. The BJP leader is a prominent Dalit face belonging to the Jatav community. She has also served as the mayor of Agra.